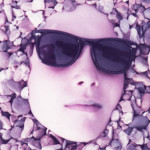 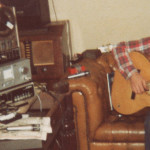 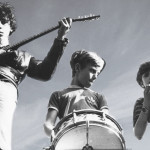 My father made me a guitar when I was still in short trousers and was still young enough to occasionally have a ‘toilet malfunction’.

Now that either means I was a very late developer or that I started very young.

Let’s just say that I didn’t need emergency underwear in my teens and that I was playing in a band in pubs and clubs around London and the South East of England when I was just 11.

Many years later and I’m still creating music. Writing, recording and playing – on my own or in a pick-up band in some of the places around the world that I’ve been lucky enough to visit – and, on occasion, with a band of brothers as Adult Cinema.

The thing is, it’s a lifelong calling – an obsession really.

And I didn’t have any choice.

I’ve been around music from the day I was born because of my father. He played in trad jazz bands and I would sometimes get to go and watch.

It’s true what they say about the seedy, smoky late night basement dives of your imagination. As a kid my mother wouldn’t let me go to the worst of them but just sometimes I would get a pass from her and my dad would plonk me at the side of the stage and I’d watch this netherworld of illicit freedoms wrapped in pure musical bliss.

Clearly, it had an effect.

And, during daylight hours, I’d sit at the end of a workbench as my father crafted exquisite guitars.

When his customers came to collect their handmade instrument I would stand slack-jawed in amazement as they effortlessly picked light and shade and highs and lows from this wooden beauty that my father’s hands had crafted.

And then he made one for me.

And there was a drum kit, and a piano, his trumpet and a bass guitar. The height of technology for home recording at the time was a Teac 4 track reel to reel tape machine and my Dad had picked one up in a South London pub.

He didn’t make me play and, in fact, he didn’t really do anything to encourage me – but he would answer if I asked for help. And, my uncle (who’d taught Chas Hodges of Chas ‘n’ Dave how to play) did pop round and give me a few pointers!

But the environment I was in meant that, truly, I had no choice – music was in me and around me every day.

At the age of 11 a group of local lads, older than me by a few years, asked me to be the drummer for their outfit – the mighty ‘Sound Barrier’. God knows how, but my parents allowed me to head down that path, and we’d play wherever anyone would let us.

Looking back, I can’t recall how I was even allowed in the venues to play. I think it was a different age and people cared a lot less about licensing laws, and, of course “I was in the band”. No drummer, no show!

We stuck at that for a few years and the bass player, Adrian Bushby, later went on to win a Grammy for his work with Foo Fighters and Muse – proving, at least, that I kept good musical company even then!

That band and a few other line-ups I joined in my early teens changed my relationship with and informed my lifelong view of music. I loved learning to play and fiddling with recording – and I still do, striving to improve every day. But, creating your own music from a germ of an idea and working out how to make it sound the way it did in your head – and then seeing people react to it – that’s what it’s all about.

Years later, I approached music making on my own. Total control of the process was, for me, the only way to be free to make music exactly the way I wanted to. Don’t get me wrong, I love working with others, but my musical upbringing had given me the skills to do it my way – and I embraced it.

When I first played Adult Cinema to people several years ago, the reactions were great and I thought the ensuing attention from labels and managers would mean that I’d get the fabled crack at the big time.

I released the album I’d recorded, ‘This Is Your Life’, with the help of a few friends and got some more great feedback and reviews. I did manage to complete a deal with one of the major labels for them to use the tracks from the album solely for TV and Film (what they call ‘synchronisation’), but there was no big breakthrough.

For a while I left it alone, but then people started to contact me through Amazon – the only place where you could buy the album.

It wasn’t a flood of people but it started to become consistent. People from all over the world had heard some of the tracks from that album, on TV shows, trailers and even in a few movies.

And the things that they said about that album were amazing. I realised that all my effort in making it had been worth it. These people loved it and loved it enough to spend days (literally) tracking down the album, and then me – to say thanks.

And for some time I didn’t know if this trickle of people represented what people really thought of the music I was making and whether I should give it another shot.

But I hadn’t ever stopped playing and writing. All that had stopped was the notion of recording albums and selling them to people. For as long as I can remember, I had always written, played and recorded – and that never stopped.

When I talked it over with my new management team, I realised that I’d always been a musician, a working musician at that. And I did it for me, because I love the act of creation.

What was new was the reaction from others. Somehow that made it all the more worthwhile.

Knowing finally that what I made had an effect on a listener, on someone like you, is what makes me a musician. I can make music for myself, and that’s great, but when I make it and others, like you, tell me that you love it, then….that matters.

That many people bothered to make a concerted effort to find me and tell me they loved it – that matters even more.

So, however you found me and my music, you have my heartfelt thanks for listening and making it matter.